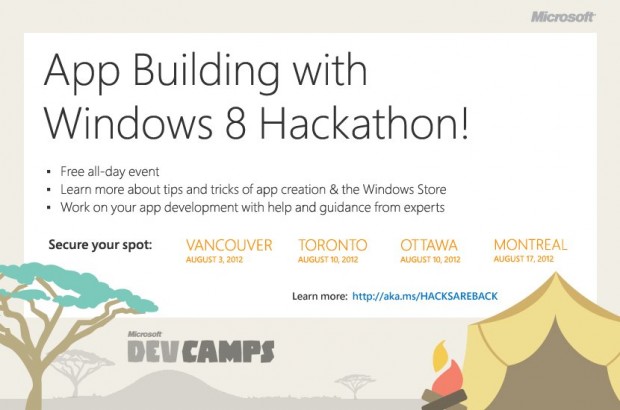 Windows 8 is scheduled to be released in October this year and with it comes a whole new infrastructure for creating and publishing custom applications for Windows powered devices. If you want in on the fun, look no further than the Windows 8 Hackathons scheduled across Canada this summer:

Space is limited but the event is FREE!”

For more info go to http://aka.ms/HACKSAREBACK

http://www.youtube.com/watch?v=dpzu3HM2CIo
Last night Microsoft lifted the veil on one of their ultra secret projects of which there has been much theorizing and guessing but little actual information. At a Los Angeles event presented by the top brass of the company, a new product line was announced, and with it a new path was staked out for the company that has pretty much defined personal computing.

What was presented (and what is shown in the flashy but vague video above) was the Microsoft Surface: A tablet powered by either Windows RT or Windows 8. The name itself is confusing – the Surface used to be a gigantic touch screen table – and the two variants will leave the masses stumped, at least at first, but even so this is good news. And unless something strange happens in the next few months I see a Surface in your hands in the not-too-distant future.

Almost ten years ago I drew a computer for Angela. It was a touch screen computer with a monitor that flipped vertically so it could be used as a tablet or as a stand-alone TV. It had multi-touch (unheard of at the time) and both touch and pen input, and in my mind it would revolutionize the computing industry. Unfortunately I don’t own a computer company so the drawings remained on a piece of paper.

What mattered though was how the computer was to be used: I envisioned myself on a plane, with the computer on my lap, recording music with a keyboard on the multi-touch screen, editing videos in Adobe Premiere using a pen and doing work in Photoshop. What I drew was a crude version of a full feature tablet computer. And no matter what the iPad fanatics say, that’s what everyone has always wanted.

With the launch of the iPad we saw a dramatic shift in personal computing – one that took the computer from a working tool to a playing and entertainment tool. And though the iPad and Android tablets do have lots of productivity tools, when the real work is to be done the “real” computer is the only option. Before the iPad announcement everyone and their grandmother assumed Apple would release a slate MacBook Pro with multi-touch. They didn’t. And they haven’t since. As a result there is still a gap in the market. What Microsoft has done with the Surface Pro is fill that gap. And that is bigger than you think.

The Surface comes in two versions, one of which I don’t care about. I’ll get to that in a second. What matters here is the Surface Pro running Windows 8. And here’s why: With this device, which for all intents and purposes is a keyboard-less ultrabook, you can do everything you can currently do with your laptop, just in a smaller and more convenient form factor. In the demo at last night’s event they showed off photo editing with a pen in Adobe Lightroom. This resulted in me commenting on a Facebook thread that “Any photographer with a brain will buy this thing”. What I saw was a device that fits perfectly into an existing workflow: With the Surface Pro you can tether your digital SLR to the Surface, control it in Lightroom, and edit with a pen on the fly. You can do the same now, but it’ll be with a laptop and a Wacom tablet. This is just easier. And it’s only the tip of the iceberg.

What I hate (yes, hate) about my Transformer Prime is that a) it doesn’t let me do web debugging, editing and publishing on the fly, and b) it doesn’t let me run a local server so I can demo websites for my clients. These functionalities are imperative to me and the reason you’ll often find me lugging around both my Transformer and my laptop. It is also the reason you’ll notice a lot of Apple users lugging around both their iPads and their MacBook Pros or MacBook Airs. What Microsoft has done here is combine the two devices. And it’s a stroke of genius.

On that note I would not be surprised if Apple will release a touch MacBook Air in the next 12 months or even sooner. And when they do all the Apple heads will yell from the rooftops that it is far superior to anything Microsoft could produce. We live in a time of religious dogma. Sad but true.

A tale of two versions: Windows 8 vs. Windows RT

It has long been known in tech circles that Windows 8 will ship in two main versions: Windows 8 (the new version of the Windows operating system as we know it) and Windows RT. Windows RT is a weird little hybrid OS that is targeted towards tablets and other touch screen devices (phones perhaps? I’m just guessing here). The differences between the two are striking and I hope Microsoft changes their naming conventions before the release to avoid confusing the hell out of people. Windows RT as it is right now does not run your Windows applications. Instead it is similar to what you see on the iPad and Android devices: It runs apps from the Microsoft App store. That means it is light weight, uses less space and battery, and requires less beefy hardware. As a result the Surface (Windows RT version) will be lighter, have longer battery life, less memory and be snappier. But it will also not run all the stuff you want it to run. In reality it will be Microsoft’s version of the iPad.

The Surface Pro on the other hand will run Windows 8 proper meaning you can run all your regular software on it. It also means it’ll be heavier, have beefier hardware, and most likely shorter battery life. And it’ll cost more.

Erm… aren’t there already Windows tablets out there?

For those of you who live at BestBuy this announcement is a bit weird. Because if you go to BestBuy right now you can buy at least two different Windows tablet computers (known as “slate” computers). Yes, it’s true. And come the October-ish release of Windows 8 the market will be flooded with similar tablet computers running both Windows 8 and Windows RT from all the major computer manufacturers. Which is why I wrote the article “Don’t buy a new laptop right now” a few months ago. With the release of Windows 8 the computer market is going to change dramatically, and all the computer manufacturers are lining up new devices; desktops, all-in-ones, laptops, ultrabooks, and tablets, to correspond with the release.

This explains the last somewhat perplexing news from last night’s event: While the Surface (the tablet tablet) will likely be released in conjunction with Windows 8, the Surface Pro (the tablet computer) will be released three months or so after the release. This is by all accounts a blatant move to ensure that the OEMs (Asus, Dell, Samsung, Acer, HP etc) have a chance to roll out their own products before Microsoft steps in and takes over the market. Because unless the Surface Pro is a piece of shit computer that sets fire to your furniture and makes your dog go bald, everyone will simply wait for the computer right from the mothership and buy that one. I know I will. And so, I predict, will you.

Though it is tempting to pick up a new laptop these days what with all the fancy new ultrabooks and other slim and powerful devices coming online I strongly recommend you hold off buying that new laptop. And here’s why:

Microsoft is working on their new operating system Windows 8. And with Windows 8 the way we interact with our computers will change forever. Windows 8 makes touch a 1st citizen of the computer environment and brings the so-called “post-pc” world back in line with PCs. However, if you buy a new laptop right now you’ll be stuck in the no-touch past. In other words, your shiny new laptop will become a relic of a bygone era. And it’ll happen as soon as October 2012 if the most recent reports about the Win8 launch are correct.

What the ordinary consumer doesn’t know is that right now there are tons of touch ready laptops and touch screen tablet computers on track to be released. But very few of them are currently available. The manufacturers are holding these next gen PCs back waiting for the release of Win8 (and no doubt trying to deplete their stash of non-touch PCs in the process). For this reason I predict you’ll see a landslide of discounted and “cheap” non-touch laptops in the next little while that will seem like great deals. But come October, one of these PCs will be what we Norwegians refer to as a “cat in the bag” – a deal that seemed great but was in fact a bad one.

So, if you can, hold off on buying a new laptop until Windows 8 is released in the fall. The new touch enabled laptops will flood the market and will likely be sold at the same price as the regular non-touch ones currently available. And if you don’t care about touch (you will, but just for argument’s sake) you’ll be able to get an old non-touch laptop way cheaper.

If you absolutely have to buy a laptop right now, get the cheapest one you can get your hands on and assume you’ll be dumping it for a new Win8 ready one in the fall.

Or don’t listen to me and do whatever you want. Your choice.