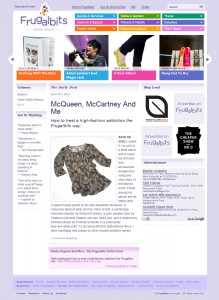 Last year I was contacted by two veterans of the publishing business with an idea for a new online magazine called “Frugalbits“. It would be a daily publication in which readers would find deals and ideas on how to be more frugal – a virtue I think we all wish we had more of. They were looking for a highly customizeable web solution for the site and had realized that the answer might be WordPress. Smart ladies.

Several months and many hours of nit picking code later and Frugalbits is now finally live to the world. It’s a labour of love for me as well as the crew behind the site and it is a project I am exceedingly proud to have been a part of. So, without further ado, let me walk you through some of the interesting elements of the site:

A Carousel of Stories

Early on in the process the request came in to have a featured story carousel at the top of the front page. Unlike many other such sites the Frugalbits team didn’t want to have multiple text stories on the front page but requested instead one main story, named The Daily Deal, to be featured and then have a carousel with the latest 8 stories displayed at the top. Over the years I’ve worked with many different featured story plugins and carousels and as with pretty much every other plugin I come into contact with I’ve hated them all. For this one I decided I’d go out and find something that could be customized down to the last pixel and that ran independently of the whole WordPress plugin regime. And after a lot of searching I finally found a JavaScript based carousel I could take apart and put together exactly the way I wanted it.

The carousel requested would feature 8 stories (4 and 4) and would have a square story picture, a tagline on a translucent banner and the story title itself. In addition the coloured banner the story title would go on should change depending on the category the story belonged to. This meant I needed to create a loop in which 4 fields were queried for each story: thumbnail, tagline, category and title. It quickly became apparent that apart from the title the rest of the fields had to be customized for each story. To solve this I created 3 custom fields; thumbnail, cat and tagline, and the story editor filled out each of these taglines with the appropriate content. It worked quite well and I was satisfied that this solution would work

But. After a beta launch one of the editors brought up a point I never considered: The first entry of the carousel would always be the same as the story on the front page. And since the front page only had one story this was to put it midly somewhat redundant. Fortunately WordPress has an answer for this type of situation: offset.

An explanation: The carousel is populated using the standard query_posts() function. By using the offset variable in conjuction with posts_per_page I can define how many posts the query should “skip” before starting the list. And since I just wanted to skip the first (front page) post, that value should be 1. Problem solved. 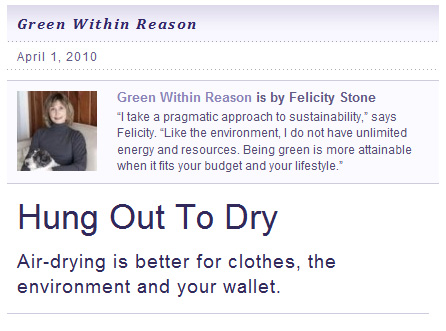 Because Frugalbits is a magazine it has both “normal” articles and also columns written by a select group of columnists. The request was that for these columns there be a box at the top right under the title with a photo, name and a short bio for that columnist. WordPress doesn’t have a standard function to add such an author box and though there are plugins that do it they are clunky, full of garbage code and not easy to style. I chose to go hard core on this one and just write it right into the single template using a conditional custom field. The result was the nice chunk of code below which produces a nice CSS styled box with the author Gravatar, category name, author name and WordPress user bio when activated with a custom field with the name “author” and the value “true”:

One of the most important features of the Frugalbits site is actually something you hardly notice: The custom templates. Depending on where you are in the site the layout changes subtly. The front page features the carousel, the single post pages have the optional author box, the category pages have only the right sidebar and show thumbnails for each story and the legal pages have an entirely different sidebar from the rest. To top it off the F Spot category has an entirely separate tempalte that looks nothing like the other ones. All this is done by using conditional statements and creating custom theme files for individual pages and categories.

Now that it’s launched I’m looking forward to hearing what people have to say about Frugalbits and it’s functions. Feel free to leave your questions and comments below and please visit the site and learn how to be frugal yourself!

5 replies on “Frugalbits.com – WordPress as a Magazine CMS”

Nice post, actually working on a “magazine-ish” style wp-theme myself for an upcoming site. Good to hear what others have done (will probably steal that author snippet 😉 )

And ohyeah, kind of curious about the carousel you found..? which one is it 😀 ???

[…] To get a full overview of how Frugalbits.com came together and what features were built in head over to Design is Philosophy. […]

The ordinary principle here is to present users the basics of how to update their web sites and sustain a CMS web site on a day to day basis. Things like installation, pattern of the navigation user interface, code optimization etc are all really a lot more advanced and typically require days or weeks instead than minutes to arrange properly.

its a cool theme. Do you sell this theme ?

Sorry Sam. The Frugalbits site is a custom client project.