On Tuesday Vimeo released their new Universal Player in an attempt to serve up videos to the ever changing landscape of web enabled devices (ie. iPhones, Androids and iPads etc). As we all know video on these small devices has been a bit of a struggle, especially with Apple flat out refusing to support Flash of any sort. Vimeo, like YouTube, is now turning to HTML5 video to try to combat this issue.

The new Universal Player uses an iFrame along with some fancy code to serve up the appropriate type of video file to different devices and browsers.

I’m getting sporadic reports of everything from “it works, what the hell are you on about” to “I can’t see the iFrame”. It seems that the videos (from a Plus account with Mobile version activated) works properly on iPad, iPhone 3GS and 4 as well as Android devices running 2.2 (Froyo). On my Rogers HTC Magic which still runs 1.5 due to Rogers’ complete disregard for customer satisfaction it does not work. In the native browser the video still shows up with buttons but nothing happens when you click the buttons. In Opera Mini the iFrame doesn’t even show up. It looks like growing pains and one could argue that backwards copatibility to smartphone firmware which was obsolete a year ago is a bit excessive, but then people with Android devices have very little choice when it comes to their carriers refusing to roll out updates. Until I hear otherwise I’m going to write Vimeo videos not working on Android 1.5 down to outdated firmware and put it on the long list of reasons why Rogers needs to get their act together.

UPDATE: Plus users only (and you have to activate the feature)

A bit more digging lead me to this page where I found that the new Universal Player is only universal for Plus users. If you have a regular old non-paid account your videos won’t play on mobile devices. What’s more, to get the feature to work you have to first activate Mobile Versions in your account. I tried doing this through my web browser but the feature was nowhere to be found. When I logged in using my phone and went to My Videos there was a huge button to activate Mobile Version. I’ve now clicked the button and it says “Mobile versions of your videos are being made right now. Check back here later!” No idea how long the conversion will take.

The good news is that once Mobile Versions has been activated it automatically applies to all future videos uploaded as well. The bad news is, like I said, that it only applies to Plus users. The Q&A on the blog post indicates that the feature might be released to everyone some time in the future so I’ll keep my fingers crossed.

Stay tuned for another update once the videos have been converted properly.

But does it actually work?

I’m working on a large project with a lot of video integration and we needed to find a solution so that the videos would show up on the iPad and iPhone in particular. In the old days (3 days ago), Vimeo videos didn’t work on these devices but the new Universal Player looked to solve these problems. Or rather, it solved the problem for the iPad. On the iPhone (and Android for that matter) it doesn’t work and causes some weird effects (if you have one of these devices you can take a look for yourself by opening this post and playing the video above): 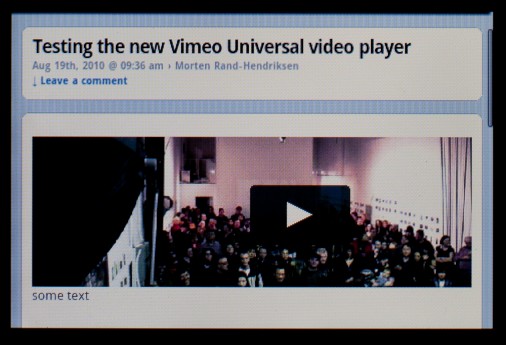 The video iframe is severely cropped vertically and does not play. No matter what I do. And no, it’s not a matter of bad code or an uncompliant server. I’ve tested this on 5 different servers, in different sites, and with different configurations. The videos do not play in the native iPhone browser nor in the native Android browser or Opera Mini on Android. All I get is the cropped (and very wide) frame with the video thumbnail and a play button.

I want this to work, but as of right now, at least as far as I can tell, it doesn’t. If you have a different experience, please drop a line in the comments.

Just found another disastrous problem with vimeo mobile.
If you upload and replace a video it does not update mobile versions with it so any old versions you have uploaded to the same URL are being seen by mobile users.
Headache for people like me who’s work has gone out to press etc.
Imagine showing a client the work before it’s finished and then replacing the video with the final file only to find that all mobile users are seeing the first draft of your work!

It will make you want to bring out your inner, gritty artist, and stomp in style, conjuring up your favorite Girl-Drummer in a Raucous Garage Band alternate universe you.

Our feelings have to stop here, do not know what the future, Ugg Boots
ireland Online perhaps we will take a good life with each
other, may be painful life, perhaps. Or simply Easy methods to Space pretend Ugg ” booties “.