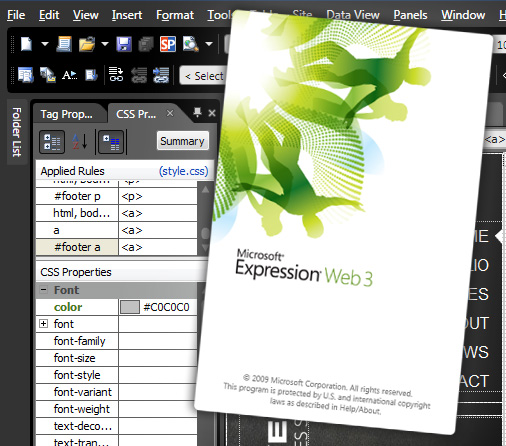 Expression Web 3 is now available for trial download directly from Microsoft. Click here to join in on the fun!

It’s no secret that I’ve been playing around with various pre-beta and beta versions of version three of Microsoft Expression Web for the last few months, all in preparation for the release of my new book Sams Teach Yourself Microsoft Expression Web 3 in 24 Hours which is available for pre-order from Amazon.com right now (even though it’s not finished yet!) So for all this time I’ve had to keep my mouth shut about my new toy and what it can do. Well, no more. I just got the all clear from the development team to talk about the application publicly and share some screenshots of what you can expect when it goes public in the next couple of months.

So, without further ado, here is a quick rundown of the new features, the new appearance and my innitial thoughts on the new member of the Expression Web family.

The first thing you’ll notice (apart from the new logo in the splash page of course) when opening Expression Web 3 is the new UI skin. The application looks very different from its two prior iterations in that the team has moved away from the classic fake 3D/embossed look to a 2D/3D inspired look with flat surfaces and drop-shadows. The interface is also a lot darker than the prior ones with a dark gray being the predominant colour. The new look makes me think of new media applications like TweetDeck and DestroyTwitter and there is little doubt in my mind that much of the inspiration was taken from what I want to refer to as the post-web2.0 look.

As you can see in the graphic at the top of this article the new look is very clean and sharp and makes icons, toolbars and panels pop out. This dark flat-tastic look has already been used in Expression Design and Expression Blend and I think it is a welcome change that not only links Expression Web to it’s application siblings. It also visually separates the new application from those of the past and signals a new beginning of sorts. Not to mention that to me at least it is much easier on the eye (I tend to do a lot of design work in the dark). 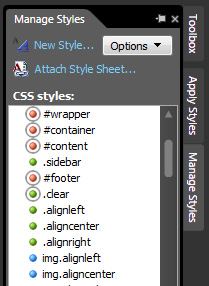 One of the things that really irks me with design applications in general is all these toolbars and task panes that take up valuable screen space. To curb my frustrations I prefer to work on a dual-monitor setup where I can stash all the tools and task panes on one monitor and leave the application on the other. But this doesn’t work when I’m on my laptop (which is where I’m at most of the time these days). And in Expression Web 1 and 2 even with a widescreen monitor the task panes ate up a lot of real estate. As a result I kept turning the task panes on and off all the time – a process that was a real time waster. In response to complaints and suggestions to do something about the task panes, the dev team introduced a simple AutoHide feature that lets you collapse the panels (they’re not called “task panes” anymore) to the sides from where you can open them by hovering over their names. In practical terms that means you can leave all your favourite panels on the workspace without having them take up tons of room in the process.

The AutoHide feature is easily toggled on and off with a pin logo (seen in the upper right-hand corner of the grab to the right). When the pin is lying sideways as in the grab, the panel is pinned to the wall (AutoHide on). When it’s in the upright position, the panel is a permanent part of the workspace. It’s a simple feature but it makes a world of difference, especially because you can pin individual and rarely used panels to the sides for easy access if you were to need them.

It’s no secret that the publishing options, and especially the FTP publishing option, in Expression Web 1 and 2 were less than stellar. It was so bad in fact that I urged the readers of my book to not use them. Well, without breaking any deals with my publisher I can tell you that my recommendation in the new book is quite different. Not only has the troll that was messing with the FTP been slaughtered but two all new publishing methods have been added to the list providing more secure transfers and options. The list of publishing options now features SFTP (Secure Shell File Transfer Protocol), FTPS/SSL (File Transfer Protocol over Secure Socket Layer) as well as the original FTP, FrontPage Server Extensions, WebDAV and File System. 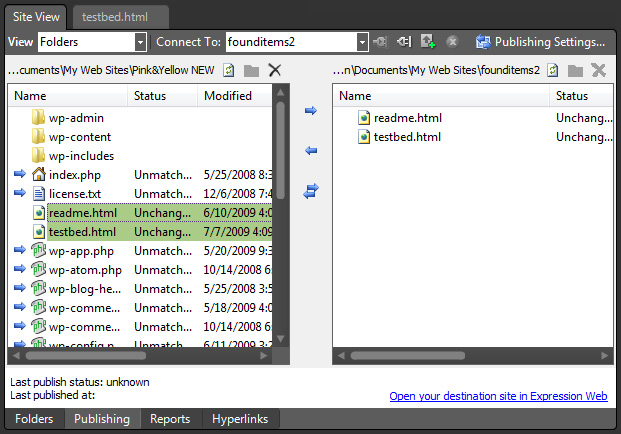 But that’s not all. Expression Web 3’s publishing option has been rebuilt from scratch and features a whole new range of functions including the ability to define multiple publishing locations for one site so you can push your files to a backup storage as well as publish them online, or publish them to multiple servers, or set up a testing server and a main server within the same project. This again is a seeminly minor but actual major improvement that makes life a lot easier for people like myself who do a lot of server testing and cross-publishing. 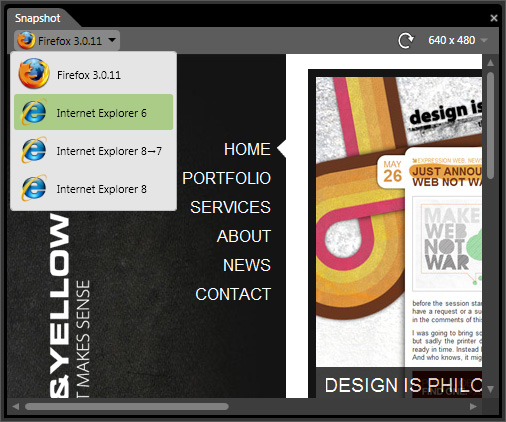 In addition to alterations and improvements to the old versions of the application, Expression Web 3 introduces some new features that are going to make your life as a designer/developer a hell of a lot easier. They are connected at the hip but I’d rather deal with them independently. The first one is the Snapshot panel. Like the name suggests, Snapshot takes a real-time browser shot of your current page and displays it in a panel inside your workspace. This means you now have a quick and easy way to see what your recent changes will look like in different browsers, including Internet Explorer 6 and 7 and Firefox, without having to actually run the page in a real browser.

Snapshot’s output is just that – a snapshot – and does not provide functional links and the like. But it does generate JavaScript, CSS, HTML, PHP and whatever else you want to throw at it and gives you a true representation of what your page looks like in the different browsers.Like the other panels you can undock the Snapshot panel and place it somewhere else, for instance on your second monitor. 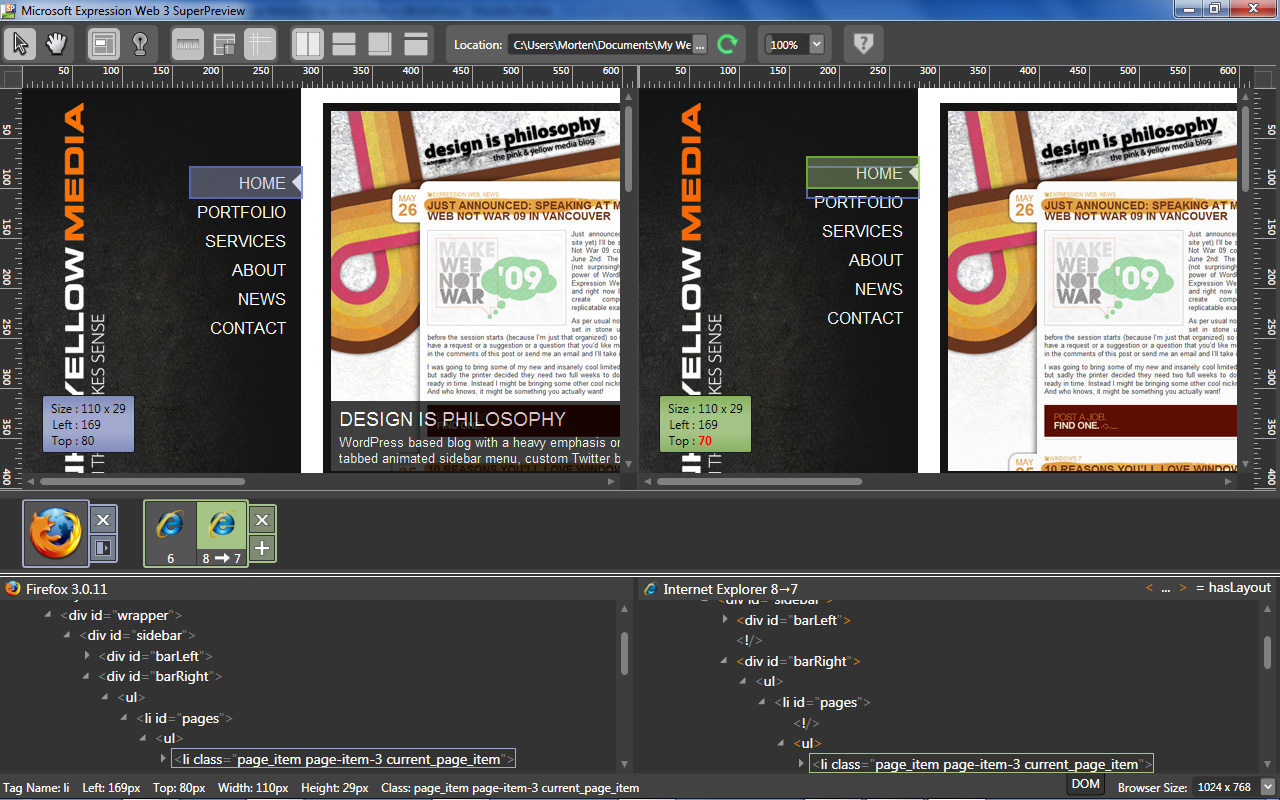 I’ve written about SuperPreview before both here on DesignIsPhilosophy.com and in the official Microsoft Expression Newsletter but it can’t be repeated enough: Expression Web SuperPreview could one of the most important innovations in web development of the last several years. SuperPreview is the powerful big brother of Snapshot – a stand-alone application that lets you perform cross-browser testing that lets you compare true output from multiple different browsers with onion skinning and side-by-side preview. To identify incompatibilities, problems and even tiny shifts the application also features simultaneous box highlighting of individual elements and even provides full FireBug-like DOM trees to give you as much info as possible about what’s going on when things go wrong.

I’m not going to go into too much detail here – the application will be better served with a tutorial video that shows how it actually works in real-time – but I will say one thing: Even if I was still a DreamWeaver user, I would buy Expression Web 3 just to get the full version of SuperPreview. And that says a lot cuz’ I’m a cheap guy. With alligator arms.

For another take on the new version check out fellow Microsoft MVP Cheryl D. Wise’s blog.

4 replies on “This is Expression Web 3”

Microsoft has left a large segment of the market behind for its server products with the discontinuation of Front Page – splitting the product into Sharepoint designer and Expression Web. SharePoint technology is not widely available on shared hosting companies and Expression Web is for experienced developers who know programming, CSS and so on

FP sites, forms, wizards and bots made it easy to throw a reasonable site together in a couple of hours without programming.

Expression web does not have the forms ease, wizards, and bots. CSS experience is needed or must be learned. Forms require programming and on and on. Not so with Expression Web.

An improvement in EW is the ability to create a silverlight movie with a ‘wizard’ but it works without programming only in Internet Explorer – the output does not work in Firefox (the automatically created Silverlight.js does not refer to the version of silverlight installed on the users machines). Microsoft says it is serious about making Silverlight a ‘web standard’ but this problem doesn’t prove it.

Glad to see Front page go. Was a nightmare to seo.