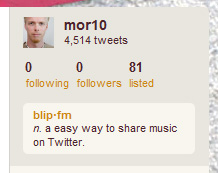 Last night our dear friends at Gizmodo released a simple exploit that allowed you to force Twitter users to follow you, an exploit already nicknamed “twape” (a combination of the words “twitter” and “rape”… classy). The exploit was ridiculously simple: Just write the word “accept” in front of a username (so for example “accept mor10”) and that user would automatically follow you. So what happens? Everyone and their mother starts force following famous people.

Sticking my head out the window I can hear the entire North American continent shouting “Hey look everybody: Oprah / Ashton / Barack / Jesus is following me on Twitter! I’m special!”

Not to be a total grump here, but serisously people, what did you think would happen? Operah would become your instant friend? Ashton would start retweeting your tips on cat hair removal? More than anything this exploit shows how willing we are to just jump at anything that pops up on the internet without thinking about the consequences.

Let’s just hope this exploit doesn’t mean we’re friendless forever. Twitter is saying they are going to restore status quo once they’ve sorted out all the bogus follows. So relax, you’ll be able to show everyone how many friends you have soon enough.