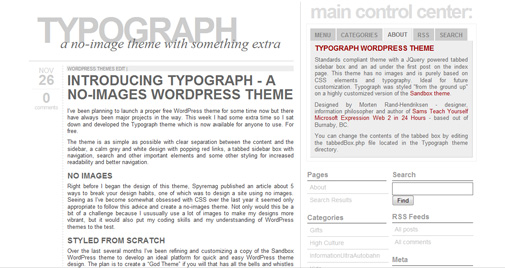 In the wake of the problems caused by WordPress 2.8 I have released a new and updated version of Typograph. In addition to fixing the technically small but hugely damaging code conflict from 0.8.5 I’ve also fixed a number of other problems:

In particular this means now all you have to do to disable the sidebar tabbed box is to remove or comment out the php include found on line 4 in sidebar.php.

Typograph 0.8.6 is now available from the WordPress Theme Directory.

It was brought to my attention last night that there is a critical conflict between the popular Typograph theme and the new WordPress 2.8. Knowing that most Typograph users will update their WordPress installation in the coming days finding the reason for the conflict and a solution was a number one priority and I am happy to say I’ve already created a fix that solves the problem. A full upgrade of Typograph will be published later today but for current installations the fix consists of just replacing one file. Here are instructions:

Upgrade Typograph to work under WordPress 2.8

I have tested this critical fix and it works.

The 0.8.5 version of Typograph was created with two goals in mind: Fix the many plug-in conflicts reported and add threaded comments. To fix the problems the NicEdit HTML editor for the comments is gone (so no more fancy HTML editing for now, sorry. I’m looking for a solution) and I have rebuilt the tabbed box from scratch using the MooTools library instead. Extensive testing with numerous plug-ins shows that at least as far as I know the conflicts are no longer there and everything works properly. If you do find any more conflicts, please tell me so I can fix them.

One of the really cool new features in WordPress 2.7 is threaded comments. Basically this means that when you comment on a posting you can answer other comments and your answer will appear “nested” within the comment you answered rather than on the bottom of the page. This is a very cool feature that you had to use a plug-in for in the past. Upgrading to threaded comments was quite a challenge. There is very little information about it around and it took me a while to figure it out. Luckily I came across two blogs with instructions and it is these two approaches combined that formed the basis for the threaded comments in Typograph. These were Chris Harrison’s blog (for styling) and Otto’s blog for backend code. Thanks go out to the both of them for excellent tutorials and to Otto for some extra help via e-mail.

The Typograph theme has now been updated to resolve these issues and the new WP 2.7 Coltrane compliant version is avaialbe from the WordPress Theme Library:

I’ve been planning to launch a proper free WordPress theme for some time now but there have always been major projects in the way. This week I had some extra time so I sat down and developed the Typograph theme which is now available for anyone to use. For free.

The theme is as simple as possible with clear separation between the content and the sidebar, a calm gray and white design with popping red links, a tabbed sidebar box with navigation, search and other important elements and some other styling for increased readability and better navigation. It complies with the new WordPress standard elements like image captions and Gravatars and even has a customizable ad space directly under the first post on the front page. And last but not least, Typograph is fully XHTML and CSS standards compliant.

Download the Typograph theme from the WordPress Theme Directory here!

See a demo of the Typograph theme here

Right before I began the design of this theme, Spyremag published an article about 5 ways to break your design habits, one of which was to design a site using no images. Seeing as I’ve become somewhat obsessed with CSS over the last year it seemed only appropriate to follow this advice and create a no-images theme. Not only would this be a bit of a challenge because I ususually use a lot of images to make my designs more vibrant, but it would also put my coding skills and my understsanding of WordPress themes to the test.

Over the last several months I’ve been refining and customizing a copy of the Sandbox WordPress theme to develop an ideal platform for quick and easy WordPress theme design. The plan is to create a “God Theme” if you will that has all the bells and whistles installed and ready to go so that new theme design is quick and efficient. To put the alpha version of this foundation theme to the test I used it to style Typograph from scratch. 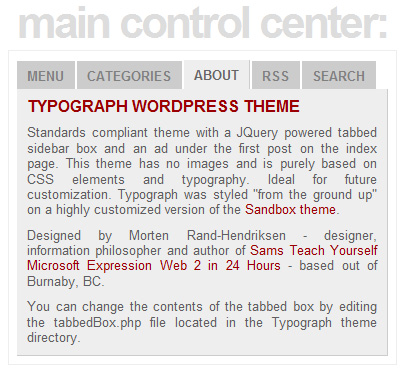 When I created the new theme for Design is Philosophy I spent quite a bit of time developing and perfecting a JQuery and CSS based tabbed sidebar box that would contain navigation as well as other useful information for the visitor. For Typograph I further developed the tabbed box and isolated it in it’s own file to simplify customization for the user. It can also easily be deactivated by commenting out a single line of code in the sidebar.php template. The tabbed box contains navigation for pages and categories along with an about section, RSS link and search box by default. It takes standard WordPress tags and can be customized to include pretty much anything by editing the tabbedBox.php file found in the theme directory.

Download the Typograph theme from the WordPress Theme Directory here!

See a demo of the Typograph theme here

If you liked this theme, consider donating donating a dollar or two so I can keep creating free themes and tutorials:

139 replies on “Typograph – a no images WordPress Theme”

Thanx for creating this theme. I’m a huge fan 😉

Thanks for letting us know the impressive tips in tachograph image issue. I truly amazed to read these excellent input here you exposed. Thanks!

I’m using this theme for my blogspot now. I can’t change the fonts. Help.

I designed the theme for WordPress. I have no idea who created the Blogger version, but I have no control over it and don’t know how it works. Sorry I can’t be of more help.

I am using your theme and the tabbed menu doesn’t work when I’m logged in and on a post. In fact, if I click fast on tabs, before the admin bar is loaded, it works. So, I suppose is something related to the fact that the admin bar use an id that is also used by the tabbed menu.
I would really apreciate it, if you would look into this sometime. I’ll try to fix it myself, if and when I’ll find more details I’ll let you know.
I am using Firefox 14.